Getting a hang of this whole "Friday" thing.

Today there was briefly a puppy outside the school, a student asked me what I would think if I had 14 puppies in class instead of 14 students (aged 8-9, I might add). I had to stop for a second and consider the options. In one case, I would have to deal with them making a mess on the floor, whining, attacking each other and refusing to do what they were told. In the other scenario.... I would have pupppies!  I kid, of course. Today was a great day, as we were finally able to carry out a larger-scale project by going outside to gather data for our Habitats project. This was thoroughly enjoyed, and carried us through until Recess.


We spent a lot more time on Math, something that has been causing minor issues. I'm focusing on the relation between place values to start with, before I move on to manipulating them. I think in doing so I will build a better understanding of the concepts, even if it takes a little while longer to do so. There are a number of games and extended activities for students to complete when they have finished, and 1 student decided to take his home to finish rather than doing it on Monday. 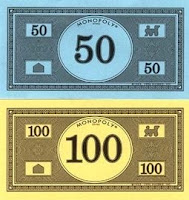 We gave out new jobs for next week and I also named my first "Etudiant de la Semaine", which means "Student of the Week". In keeping with the behaviour and socialization philosophies used by Beachy Cove Elementary, I will isolate one or more admirable character trait and name a Student of the Week who has shown it. This week it was Friendliness and Positivity. The student who was chosen will gain some special priveleges next week, and also have a chance to tell us more about themselves as the week goes on.
Prefecting duties have been further clarified as well; they have an orientation session on Monday at 11:45.

We also discussed the situation we will be in next week, when they will be allowed to start asking each other for money when they speak English during class. For Monday and Tuesday, we will not be including Recess and Lunch in this regime. We discussed how the intent wasn't to punish, but to reward those who were making an effort. We also talked about reasons why it was useful to speak French, and how using it in conversation was WAAAYYY more fun than listening to me speak French all day. 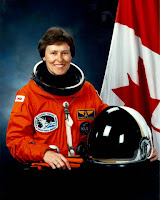 We also read a comic strip in our French books today. It was about Roberta Bondar, the first Canadian woman in space. The format really seemed to keep them engaged more than others have to this point, and I was able to get a lot of reading observation accomplished. After the fact, I showed them a video of her launch in 1992, which I think helped contextualize it a bit. It is funny to think that this event, which I remember as a 9 year-old, is now ancient history to them....
Sorry to drag on, but no shortage of excitement today. Thanks again to all who came the other night, and talk to you soon.
Posted by Sam Paterson at 3:39 PM