Welcome to the weekend 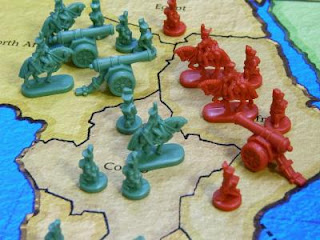 Just a quick note for tonight, more tomorrow morning as usual. The class finished up their letters for the Great Canadian Mail Race today, and we also did a great job on a Social Studies project about explorers. The afternoon, as a big "Thank You" for the effort everybody put in this week, we spent a couple hours playing games. We set up a dozen or so stations that had students playing games such as Chess, Scattergories and a variety of problem-solving, electronic and "just-for-fun" games.

The kids kept track of who they played (and what game they played), and prizes will be given out on Monday for the students who played the most games + the most different opponents. The juice and cookies were a big hit, as I'm sure you found out approximately 2 hours later.

I will give some more details tomorrow, but have a great weekend! To all budding screenwriters in my class, best of luck on the sleepover/production meeting/script development session.
Posted by Sam Paterson at 7:09 PM